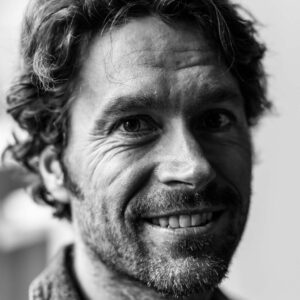 As an accomplished filmmaker, entrepreneur, environmentalist and snowboarding pioneer, Jeremy Jones is widely regarded as one of the most legendary big mountain riders and explorers of all time. Named a 2013 National Geographic “Adventurer of the Year” and eleven times voted “Best Big Mountain Rider of the Year” by Snowboarder Magazine, Jeremy has starred in over fifty snowboard movies worldwide, including his highly acclaimed, foot-powered snowboarding trilogy Deeper, Further and Higher. He is the founder and CEO of award-winning Jones Snowboards, dedicated to the development of the highest quality backcountry snowboards and accessories. In 2007 Jeremy founded Protect Our Winters, a global cause uniting the winter sports community against climate change and was recognized in 2013 as a Champion of Change by President Barack Obama. Jeremy has appeared frequently in worldwide media including 60 Minutes Sports, ABC’s Nightline News, The Wall Street Journal, The New York Times, Outside Magazine and TV, Men’s Journal, Esquire, CNN, MTV, ESPN, Fox News, NBC and National Geographic.